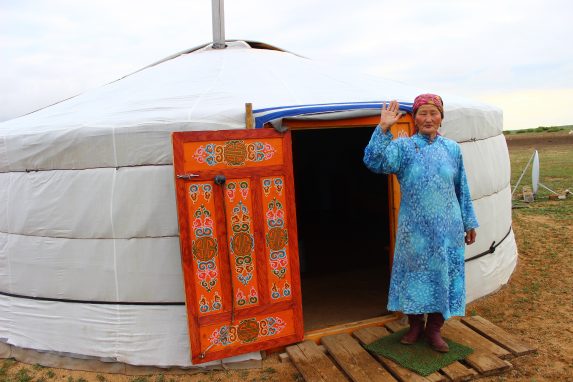 If travel to Mongolia isn’t already on your radar it should be. Here’s why, plus my recommendations for things to do and see in Mongolia on a short trip.

Travelling Mongolia isn’t really on the average tourist’s radar, but since I was living in Hong Kong (which isn’t super close by but is at least in the same hemisphere) planning a visit there was always in the back of my mind.

However, after nearly five years in HK and travels to nearly every other country in the region, I still hadn’t made it to Mongolia.

Why? Turns out that going to Mongolia, even from HK, isn’t particularly cheap nor easy.  And as someone who mostly plans their trips around cost and convenience, this meant a visit to Mongolia kept getting put on the backburner, while I flitted around to places like Japan, Thailand, and Myanmar. *cue the world’s smallest violin*

But last year, as my move back to The Big Apple loomed, I decided to bite the bullet, throw down the cash, and make the time (and energy) for a recon trip. I went to Mongolia for 5 days in June (yet froze my buns off?!) and rocked the adventure solo dolo (thinking about travelling alone? Peep my tips for solo travel here).

And you know what? It was everything.

But before I get into what I did, here are a few quick facts about Mongolia for you geography buffs out there.

-Mongolia is one of the most sparsely populated nations in the world, with only 4.3 people per square mile.
-Mongolia is known as the “Land of Blue Sky” because it has 260 days of sun a year.
-There are 13 times more horses than humans in the country, and sheep outnumber humans 35 to 1. 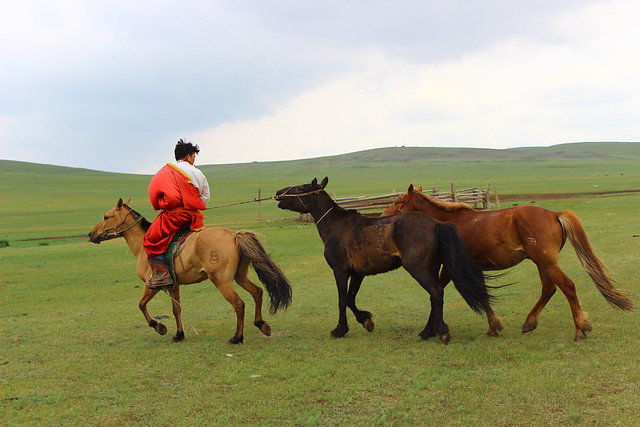 -Mongolia is home to one of the world’s last surviving nomadic cultures, and these nomads still live in traditional tents known as gers or yurts. These portable dwellings are round and covered with animal skins or felt to retain heat.
-Mongolia is perhaps best known for its steppes, or endless expanses of grasslands. These prairie regions are characterized by their lack of trees.

Intrigued? I sure was. Here’s what I did on my trip to Mongolia and why my stay there was amazing.

I visited the coldest capital city in the world– Ulaanbaatar

Did you know that Mongolia’s capital city of Ulaanbaatar is the coldest in the world? Temperatures in January are as low as −36 to −40 °C, eek!  My journey started from there, and this was the view from my hotel room. 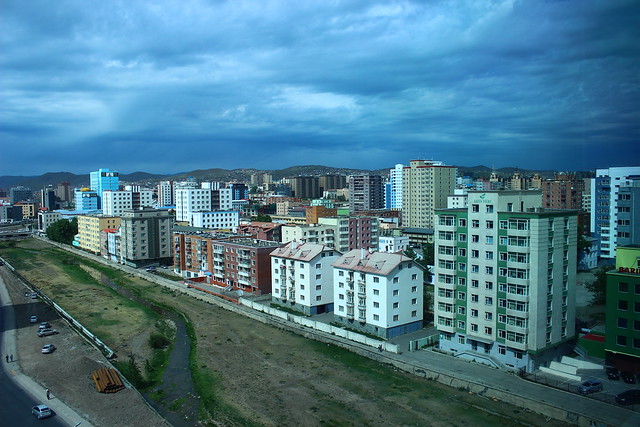 Heck, since I’m sharing, here is what my hotel room looked like.  I was hosted by the J Hotel, a very clean, new-ish hotel found a short cab ride away from Ulaanbaatar’s sites. 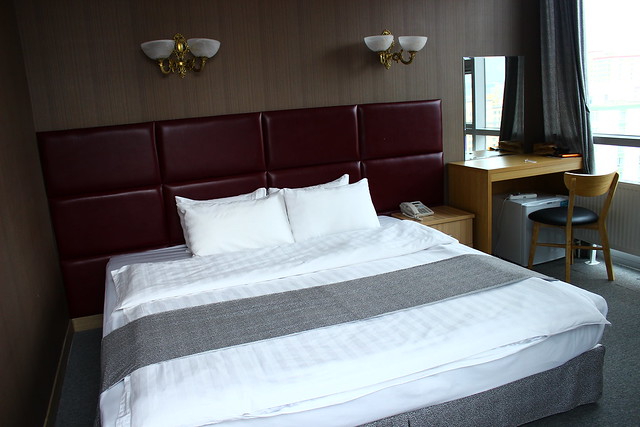 (Sidebar: I was very happy to luxuriate in that king size bed since I the previous night’s sleeping quarters consisted of stretching myself across three metal chairs in Beijing’s airport, where I had a 9 hour overnight layover.  Remember when I mentioned that getting to Mongolia was inconvenient? I wasn’t joking).

Truth be told, Ulaanbaatar doesn’t have loads of must-sees or things to do from a tourist perspective, and I found it to have a bit of a weird vibe. That may or may not be because I had a bit of a “situation” at the Naran Tuul Market– while I was wandering amongst the outdoor stalls a male vendor roughly grabbed my arm (perhaps to get me to look at his goods?) and wouldn’t let go for at least 10 seconds as I tried to, then eventually succeeded, in pushing him away. As he was speaking in Mongolian, I have no idea what he actually wanted. 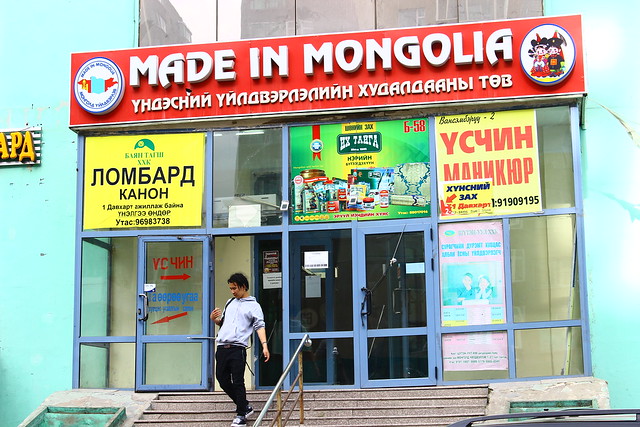 Please note: I wouldn’t say that I feared for my safety, but that, combined with a couple of lecherous glances/advances I got from men (no doubt emboldened to do so since I was a female foreigner travelling on her own) definitely contributed to the sketch factor. 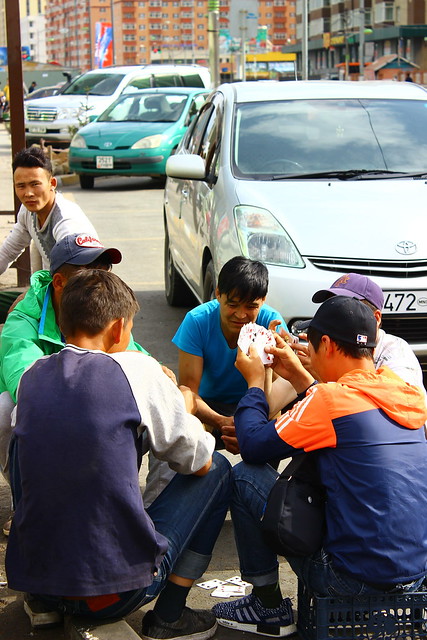 At any rate, apart from that, I spent most of my two days in the city walking around and taking photos. Both nights I was in town I ate at Hazara, a very good (if pricey) Indian restaurant about a twenty minute walk from my hotel.

While I don’t recommend visiting Ulaanbaatar as a top thing to do in Mongolia, it’s highly likely to be your first point of entry into the country anyway, especially if you arrive by plane.

I went into the Mongolian steppe, got to stay with a Mongolian family, and got to sleep in a ger

Folks, if you’re looking for a top thing to do in Mongolia– this is it! In all honesty, this is what most (if not all) tourists come to Mongolia for.

The best way to experience Mongolia when you’re short on time is to go on a tour. I thus partnered with Idre Tour on a 3 day, 2 night adventure in the Mongolian steppe. 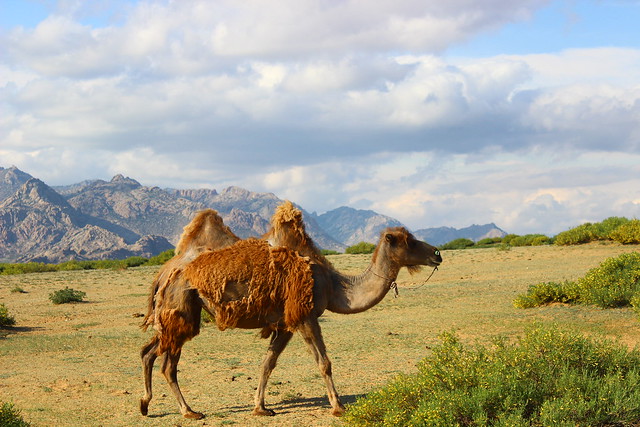 It was an epic experience that took me through two of the country’s major attractions: the Khogno Khan Uul Nature Reserve and Gorki-Terelj National Park. The tour was made all the more poignant by the fact that I was “unplugged” in all senses of the word: I had no access to electricity, running water (yup, no showers), or internet for 72 hours!

While I’m an internet addict, the opportunity to appreciate nature without the constant distraction of my phone/Whatsapp/laptop was nice. The opportunity to travel by myself (I was the only person on my tour for the 3 days) was nice, too.

Over the course of the tour I stayed with two different Mongolian families and slept in a “ger”, which I mentioned before is a traditional tent dwelling. However, while I enjoyed this authentic Mongolian experience, it was very cold at night, even in June! 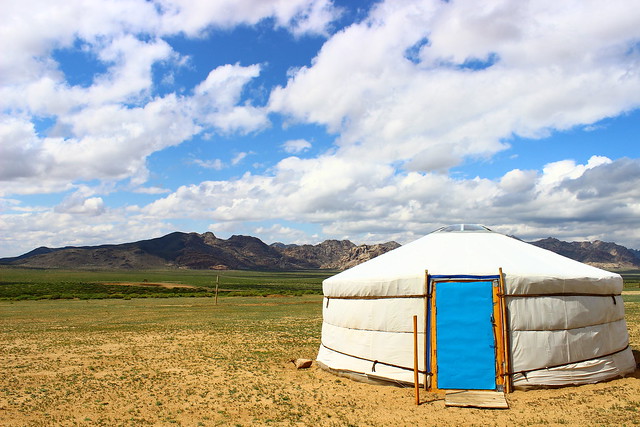 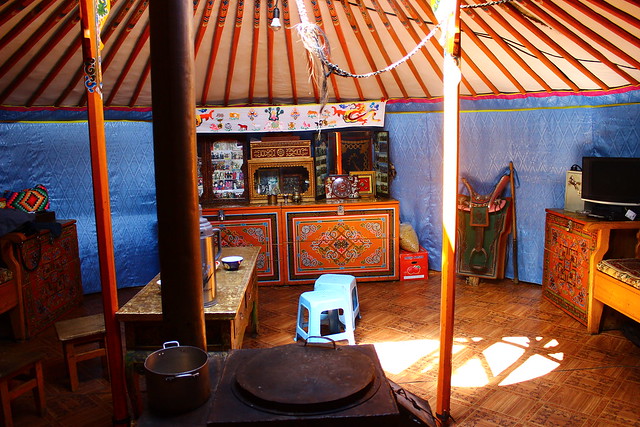 The tour company was great. Not only did they arrange everything with the families, they also provided transportation from Ulaanbaatar to the steppe and back.  I was accompanied by a local guide and a driver every step of the way– they not only explained everything about Mongolia’s unique culture, nature, and history, but also served as translators and chefs. 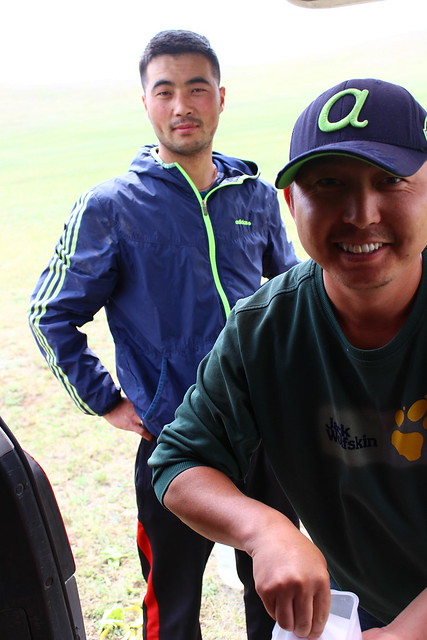 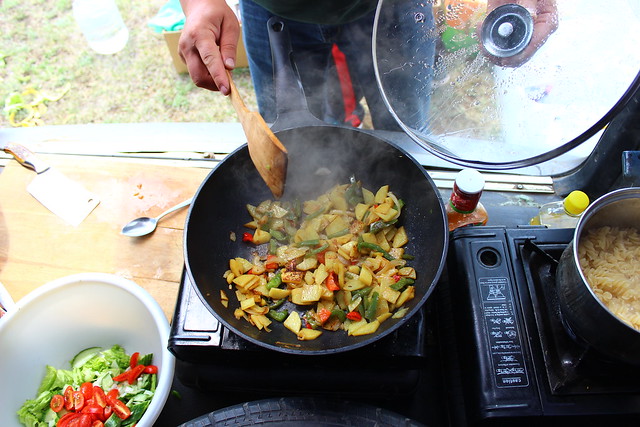 But more about the nomadic families I stayed with.  They welcome travellers into their homes, despite speaking zero English and being unable to communicate. This is so amazing to me. The first family I stayed with consisted of an older couple who I called “Grandma” and “Grandpa” as I struggled to pronounce their names (Mongolian language is not easy).  Though we couldn’t talk to each other without the aid a translator, their sincerity, simplicity, and kindness brought a tear to my eye. I’ll share more about the experience (for example getting the chance to sample traditional Mongolian food!) in a future post. 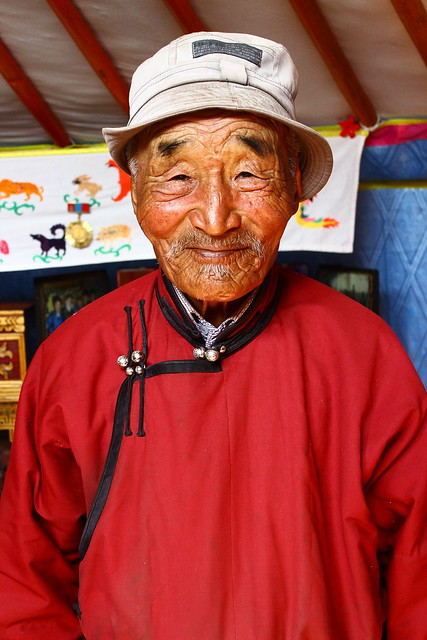 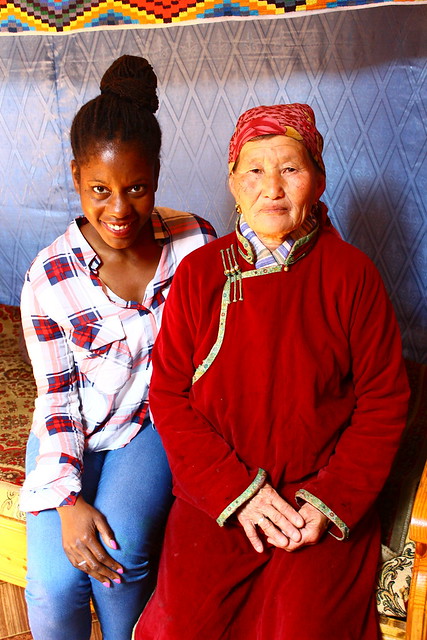 I went camel trekking in the Gobi Desert

Livestock is the main source of livelihood in Mongolia, so there were animals EVERYWHERE. Sheep, goats, camels, horses, and pigs are raised commercially. I love farm animals and got to play with a ton!

But one of the most amazing things to do in Mongolia is to ride a camel through the Gobi Desert, which I had a chance to do on my tour (I also took a selfie with a yak and watched bulls get in a fight with each other steps away from my ger, but I digress). 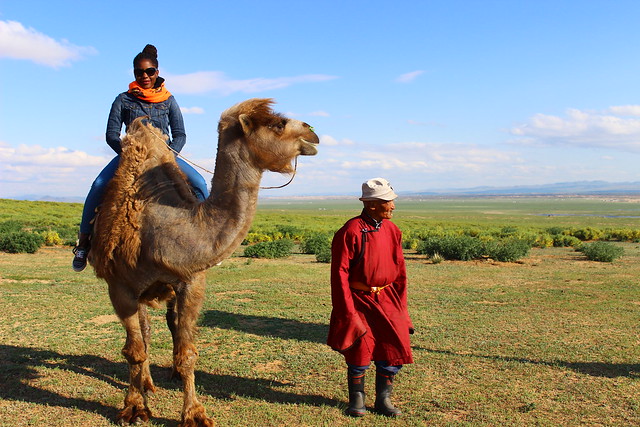 Camel trekking in Mongolia is all the more special since the type of camels found here are rare: while one-hump camels are all over Africa, the Middle East, Australia, and North America, the two-hump variety are native to Mongolia and aren’t found en masse anywhere else. 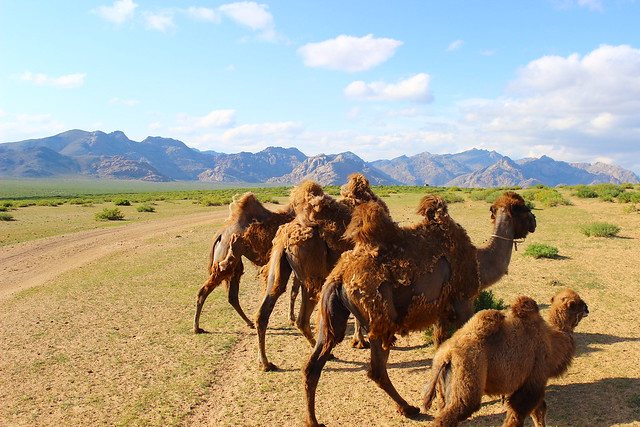 No doubt, camel trekking is a top tourist attraction in Mongolia.  I thus jumped at the opportunity to ride a two-humped beauty through the Khogno Khan Uul Nature Reserve, which is home to the southern part of the Gobi Desert.

Whether you call him Genghis Khan or Chinggis Khaan, there’s no disputing he is an integral part of Mongolian history.  Genghis is the founder and emperor of the Mongolian empire, so you’re guaranteed to see his name and likeness throughout the country.  It was thus no surprise that on the third day of my tour, we made a stop at the Genghis Khan Statue Complex, only located about an hour outside of Ulaanbaatar.

The complex is mainly built around a massive monument memorializing the mighty warrior atop his trademark horse– a random fact is that it’s actually the biggest equestrian statue in the world at over 130 feet high! 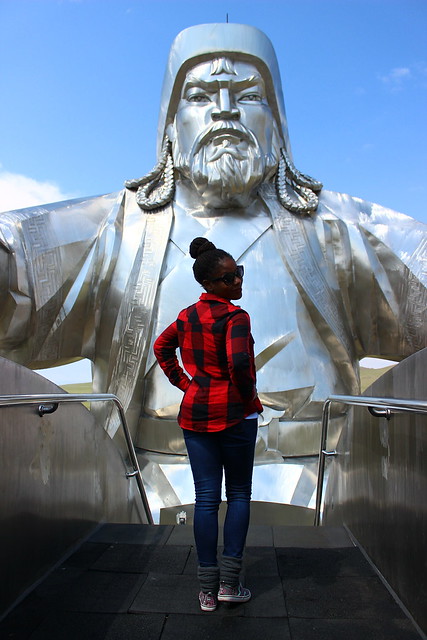 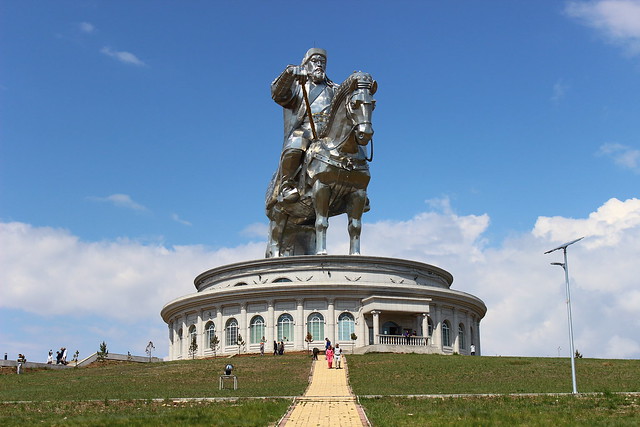 Even more random is that the complex also houses one of the biggest boots in the world– it’s composed of over 300 cowhides!

I got to reconnect with myself

Beyond all the stunning sights and attractions Mongolia has to the offer, one of the best things about going was the opportunity to reconnect with myself through solo travel, a practice of which I’m a huge advocate (especially for women). In particular, my days out in the steppe, sans distractions like the internet, gave me time to relax and ponder life’s big questions. 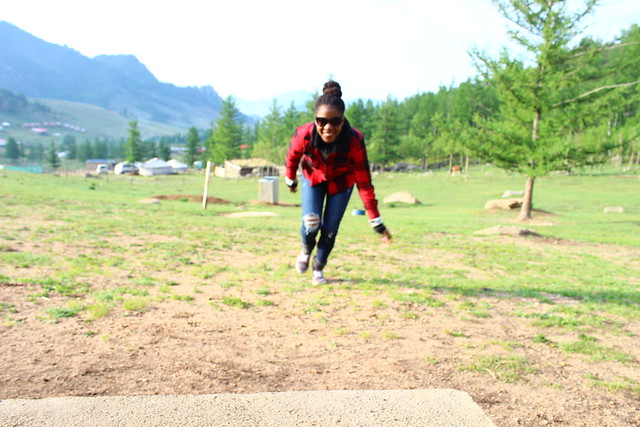 Yes, you should go to Mongolia!

So, in a nutshell, if you are interested in escaping to a less touristy destination that has loads of nature, quiet, culture, and wide open spaces where there are more animals than people (#antisocial), Mongolia is definitely the place for you. Just don’t go in the winter months because if it was that cold in June I can’t imagine what it’d be like in January!

Would you ever travel to Mongolia? What do you know about the country?

PrevPreviousHow to travel for a month with only carry-on luggage (and still look cute!)
NextWin an internship in Britain!Next