Why you should go to Tokyo 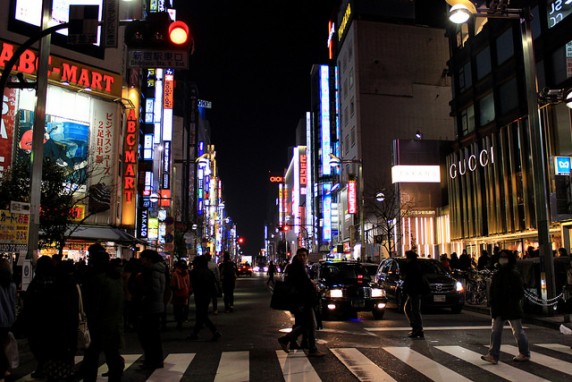 Why I think you should go to Tokyo.

There are cities and then there are cities. Cities, in italics, are world-renowned entities that elicit rhapsodic poetic waxing (think London), are given nicknames (see Paris, “The City of Lights”), and have songs written entirely about how awe-inspiring they are (“Empire State of Mind”, anyone?). They elicit wonderment, gasps of “Oh my god, you’re so lucky!” and stabs of biting envy when you mention that you’ve been or are going.

It is in this frame of reference that I declare Tokyo a city. The response I got from friends and strangers when I mentioned my upcoming visit was overwhelmingly gushy and positive. Seasoned travellers told me that it was one of the best cities they had ever been to; those who had never been let loose breathy sighs of longing. While this excited me, I have to admit: I secretly wondered whether Tokyo would live up to the hype.

Well… It kinda did.  Full disclosure: I didn’t love Tokyo, I didn’t fall under its spell.  I really enjoyed it but didn’t find myself saying, “I could live here!” while rueing the day I chose Hong Kong as my place of residence over Japan. But I found the city arresting, fascinating and perplexing, one of the strangest and most interesting cities I’ve been to.  Why? The charged atmosphere will dazzle you.

Bright lights, big city!  Everywhere you turn there are people and neon.  My travel companion and I headed to Tokyo’s Shibuya neighbourhood to take a look at the famed intersection of the same name; there, what seems like an infinite amount of people deftly cross the street.  After throwing ourselves into the fray to get a feel, we parked ourselves on the third floor of a Starbucks with a coffee in order to cop an aerial view. Just walking around the city is highly stimulating in and of itself, and will leave even the toughest critic sated.  The best thing about Tokyo? Drinking in all this atmosphere is completely FREE. All the great things you have heard about Japanese cuisine are true.  I am by no means a foodie, but gorged myself on sushi and udon the whole time I was there.  In Shinjuku, we were repeat customers at Sushi Mamire. It’s not as expensive as you think.

I went to Tokyo expecting to blow all my hard-earned cash, but actually returned home with a fair bit of unused yen!  Most of the attractions we visited (like Meiji Shrine, Tsukiji fish market, and Yoyogi Park) cost nothing to visit.   We stuck  to public transport, which was efficient and relatively inexpensive — on average, we paid about $2 USD per ride.  Eating out also felt relatively cheap; we ate heartily in restaurants for between $10 and $15 USD per meal. However, there is one caveat: accommodation. Our hotel, the 4-star Best Western Shinjuku Astina, was eye-wateringly expensive.  We paid a hefty $170 USD per night for a double room (buffet breakfast was included in the room price). That said, if you’re willing to compromise location and hotel class it is entirely possible to find something cheaper. My friend, who stayed on in Tokyo after I left, moved down the street to the simpler Hotel Sunlite Shinjuku, where she paid only $75 USD for a single room.

Hardcore shopping for the fashion forward.

Tokyo is a fashion mecca… Though it may not be the fashion you’re used to. Anything goes here — the wilder the better — and the amount of commercial space devoted to shopping means that if you’re brave enough, you can attempt crazy Tokyo style or create one all of your own.  I’m more conservative when it comes to my duds so stuck to old favourites like Uniqlo (in the Roppongi Hills mall) and Forever 21 (I visited the massive location holding court in Shibuya). It’s steeped in history and culture.

Beneath Tokyo’s strikingly modern exterior lies a very particular identity rooted in history and culture.  After visiting the many tranquil shrines, palaces, and museums dotting the city, you can take part in a Japanese tea ceremony. My friend and I attended the one offered by Hotel Okura and paid $15 USD each for a private presentation. This display demonstrated the choreographic ritual involved in the making and drinking of matcha (a Japanese powdered tea), one which extremely traditional and highly intriguing. Tea time doesn’t quite catch your fancy? Think about taking in a sumo match or watching a kabuki (Japanese puppet) show.  If you do, please let me know how it was! Sadly, we were unable to secure tickets to either while in Tokyo — they were all sold out!

Unique experiences you probably can’t get anywhere else.

Tokyo is home to the quirky and the strange.  We barely scratched the surface of this side of the city but managed to sneak in the following during our visit.

Maid Cafes: Cosplay (literally “costume play” — a cultural phenomenon where people dress up as fictional anime or comic book characters) is HUGE here, as is fetish culture.  A combo of the two has resulted in the proliferation of the “maid cafe” — essentially a cosplay restaurant where the prepubescent-looking waitresses dress in frilly maid costumes and act as servants to patrons (often referred to as “masters” and “mistresses”). It really is bizarre as it sounds! We checked out Maid Dreamin’ in Tokyo’s Akihibara district. Robot Restaurant: We also spent an evening at Robot Restaurant in Kabukicho, which is less eatery (the food is awful, actually) and more cabaret show replete with Transformer-like robots.  If that weren’t good enough, there are also many scantily clad women who straddle said Transformer-like robots (it’s not as sleazy/camp as it sounds, I promise).  If you can handle the garish lighting, loud music, and semi-nudity, it is well worth the $50 USD price of admission.

Reggae music scene: Lastly, our foray into “alternative Tokyo” involved a visit to a reggae club.  Reggae, the music form popularised by greats like Bob Marley and embraced the world over, is very much a hopping semi-underground movement in Tokyo.  My friend suggested we check out the scene, so we dropped in at Garam in Kabukicho for a hilarious evening hanging out with Japanese dancehall reggae enthusiasts (say that 5 times fast!). But. There are a few things about Tokyo you should probably know.

English is not widely spoken. At all. Though we found locals extremely nice and helpful, very few spoke good English, which may be jarring for those who rely on being able to communicate while travelling.

Tokyo may be difficult to navigate. Streets and buildings are numbered in a way I am unused to, and sometimes English street signs and names are not available or visible.  Transport is excellent but understanding how to seamlessly combine travel on the metro and the Japan Rail — two separate systems with a dizzying amount of lines — may be a doozy. Accommodation is bite-sized, and poor value. Even by European standards, hotel rooms are agonisingly small and even more shockingly expensive.  Decide what’s important to you (location, amenities, hotel rating, etc.) and let that determine whether or not a room at a particular place is worth busting your budget.

Is Tokyo a place that interests you? Have you ever been to Japan?