The 5 best things I ate in Barbados 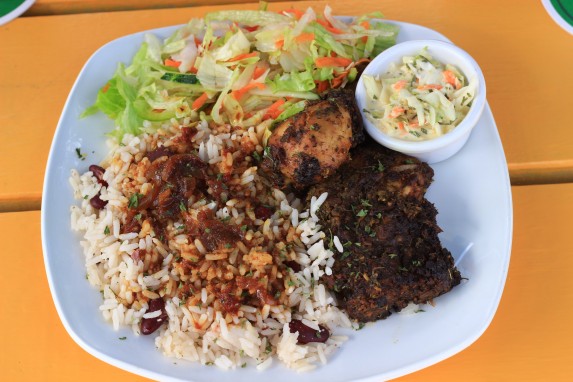 A guide to the five foods you must try on your next trip to Barbados.

Fact: Caribbean cuisine is one of the tastiest in the world.

However, it is also among the most fattening. *groan*

But if you’re willing to put aside your worries of a widening waistline, your stomach will be, well,  #winning. And what good is a trip to the islands if you don’t sample this integral part of the cultural fabric, hmm? (Hint: not good at all.) 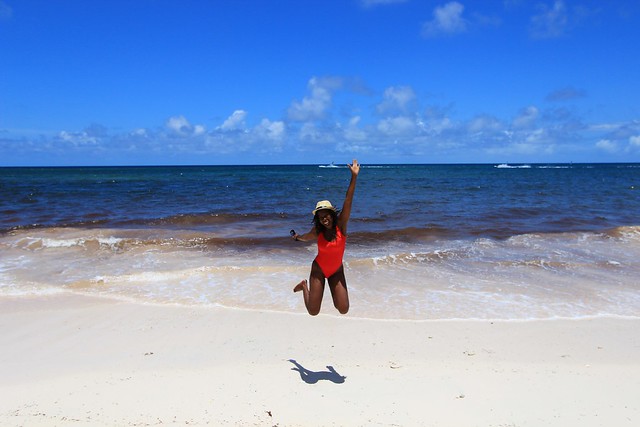 And so I tucked unashamedly into delectable dish after delectable dish when I found myself in dreamy Barbados last summer. As a result, I gained 7 pounds and a wicked case of tummy bloat, but hot diggity dog was it worth it!  After all, that’s why Spanx were invented right?

But enough about my swollen belly– the point of this post was to share the heavenly food that crossed my palate while I worked on my tan in beautiful Bimshire. Here are the 5 best things I ate in Barbados:

The 5 best meals I had in Barbados

I may have grown up in Canada but being of Caribbean parentage I looove me a good roti. For the uninitiated, the dish is comprised of a doughy, unleavened flatbread (known as a roti skin) which is then stuffed to the gills with meat or vegetables that have been stewed in a thick curry sauce. Curry chicken is my filling of preference, but get me hungry enough and I’ll polish off a curry goat roti before you can say “Buju Banton”. And so, it was with much anticipation that I made my way to The Roti Den, located just up the street from our hotel in St. James Bay.  I mean, if the establishment is named after the very food you’re dying to eat, you know it must be good.  My curry chicken roti was everything I wanted and more: the chicken tender, the sauce abundant and hot, the roti skin just the right amount of flaky. In a word: YAAAAASS. 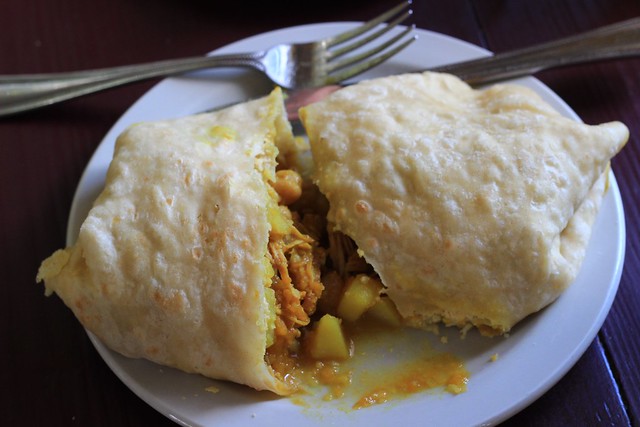 As I wrote in this post, the Friday night fish fry event at Oistins Bay Gardens is an institution.  It’s an open air venue with row upon row of food vendors who grill fresh seafood on large spits; there is also plentiful picnic table seating for those who care to indulge or just lime.  As if the food aspect wasn’t tempting enough, a variety of crafts are sold onsite and music from unseen speakers rocks the atmosphere: you can turn up, sate your appetite, and do some shopping in one fell swoop! I’m all about the food so ordered grilled tuna steak with a side of macaroni, which was delicious, if too massive to finish! 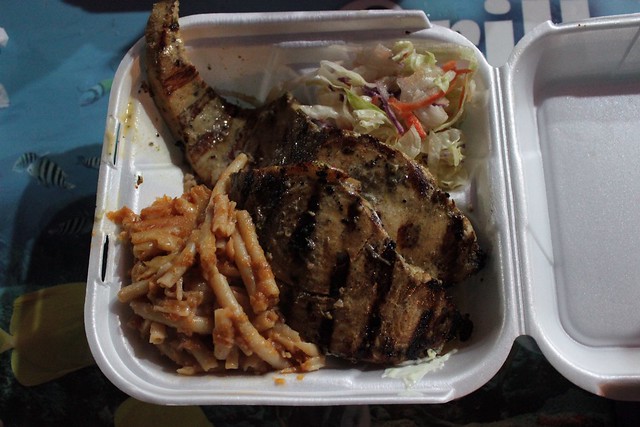 I love chicken but am finicky about my rice and peas: if too much coconut creme is mixed into the rice I gag, and if the peas are too mushy I react similarly.  Truth be told, the only person whose rice and peas I adored consistently were the ones my beloved late grandma used to make, and she passed away over 10 years ago. That said, I am still willing to give rice and peas a try… at the right places. Enter Cloud 9 Restaurant, the establishment located near the second place we stayed at on Maxwell Beach. The restaurant had the cutest aviation theme– servers were dressed in flight attendant uniforms and asked patrons whether they wanted to be seated in “premium” or “economy”.  But beyond that, my chicken and rice and peas were on point! Pictures speak louder than words so take a look at the snap to see what I mean. 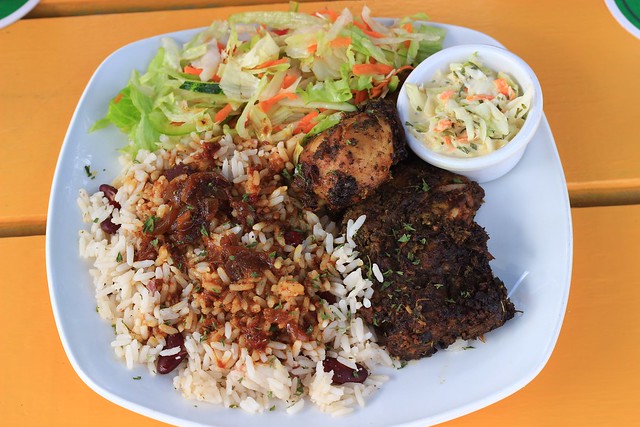 Yes, yes, I know what you’re thinking: another restaurant, another chicken dish–I probably should have mentioned at the start of this post that I very rarely eat beef or pork, oops! At any rate, Just Grillin’ is a casual restaurant that has two locations on the island: one in Holetown and one in Christchurch. I went to the one in Holetown and it reminded me of a fast-food place in that you go and place your order at the cashier and you go back up there to pick it up when it is ready. I had the jerk chicken and it was well-seasoned and not too heavily sauced, just the way I like it. Thumbs up! 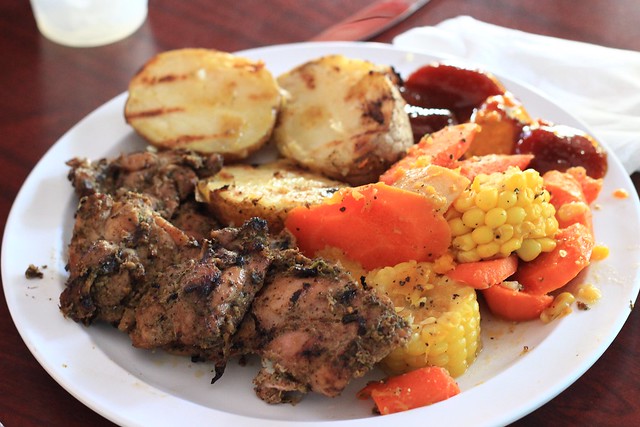 Bread and fried anything are my two major food vices so I knew that I was going to fall head over heels for the “bread and two” even before it hit my tastebuds.  The concept is so simultaneously simple and beautiful I could cry: two fishcakes (typically battered codfish that is fried to crispy perfection) wedged between a sliced soft roll known as Bajan salt bread (which is ironically not salty at all, heh). The first (and sadly only) time I got to experience this bit of perfection was at an outdoor party my friend brought me to one of the nights I was in town: it was raining, it was cold, I had no umbrella and was inadequately dressed.  Shivering like a very wet, bald cat, I was feeling a little sorry for myself– until this golden gift hit my esophagus and spread a warm glow throughout my body.  I mean, I have a penchant for hyperbole, but this was exquisitely delicious– so much so that I devoured it before I could take a picture, which is blasphemy for a blogger! However, thanks to the power of Google, here is a shot of this small but mighty foodstuff. (Thanks fellow bloggess Jet Set Sarah for the pic!) 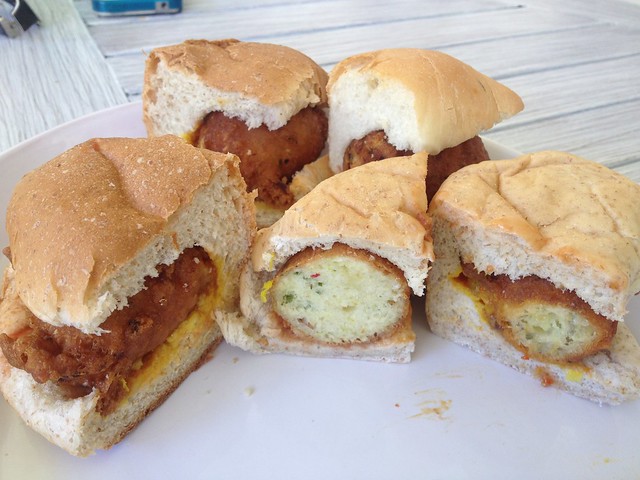 And a Banks to wash it all down

I don’t drink alcohol but my sources tell me that you haven’t truly experienced eating in Barbados if you haven’t sampled the local ale! Produced on the island, this beverage is ubiquitous! Be sure to give it a taste the next time you’re in the region. 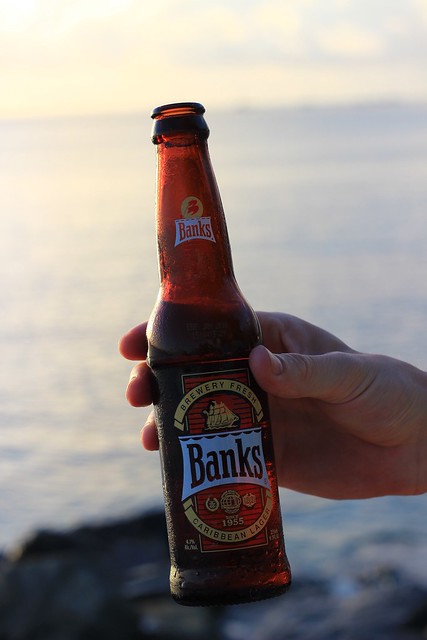 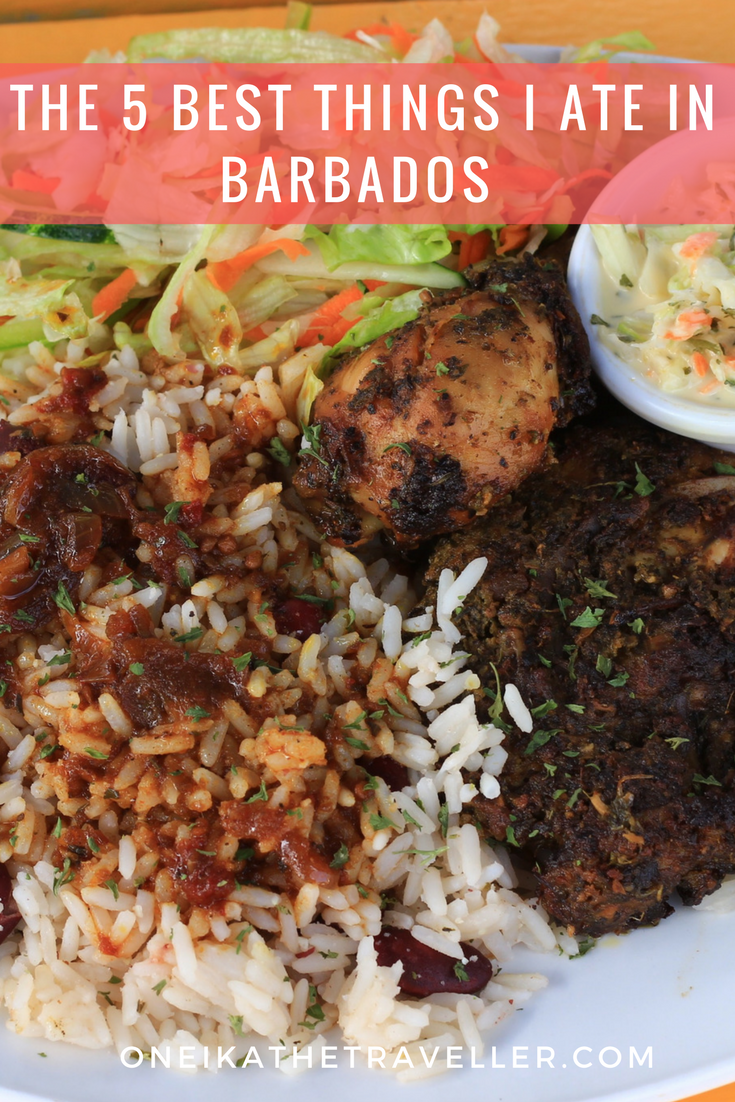 PrevPreviousIs it OK to recline your airplane seat?
NextStop pretending everyone can travelNext