The Lack of Black in Travel Blogging and Travel Media 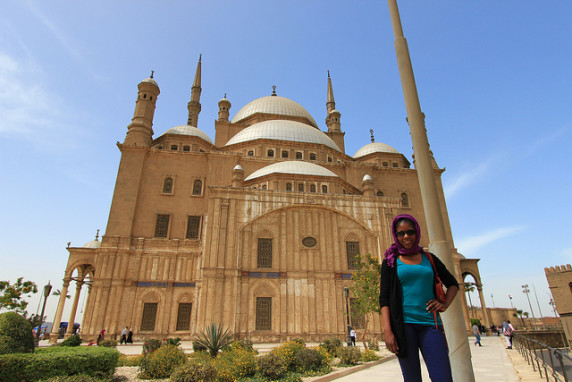 My thoughts on the lack of diversity in travel blogging and the travel industry as a whole, as well as the wider implications of this phenomenon.

Early last week, the White House invited the top 100 travel bloggers, writers, and online media creators to participate in a symposium on youth travel, diversity, and the importance of studying abroad. The glitzy event, known officially as the White House Travel Blogger Summit, was significant in that it finally recognized the role online media plays in providing travel inspiration and encouraging young people to seek out opportunities abroad.  The summit was well attended by big names and brands in travel media, and invitees “broke the internet” in true new media style: by live tweeting pictures, impressions, and quotables from keynote speakers.

But a cursory glance at their congratulatory and jubilant online updates revealed something disturbing: all the guests, it seemed, were white. I repeat: the White House’s travel conference, whose purpose was to promote diversity, cross cultural education, and foreign exploration, only tapped one demographic (white bloggers) to discuss these issues of global importance. The irony of this decision was not lost on me, a Jamaican-Canadian expat who has studied abroad in Europe and currently lives and works in Asia, nor on some of my peers — also black, avid travelers, and digital media creators passionate about making travel accessible to everyone. We took to Nomadness (one of the premier online discussion forums for black travel) to express our dismay at the absence of black and brown faces at the event, airing our outrage (or at least annoyance) at the exclusion. 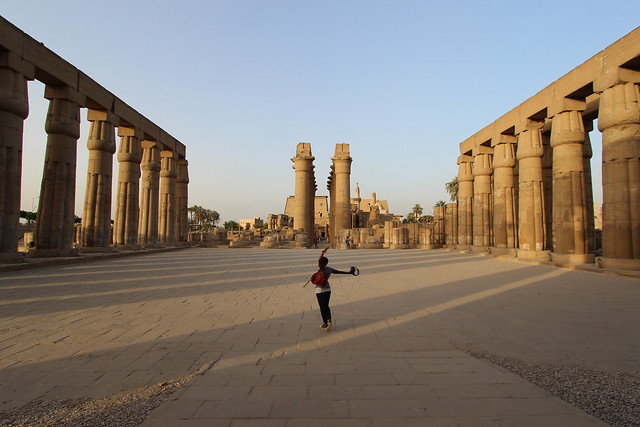 However, before any of us could fire off a letter to Obama bemoaning the lack of much-needed diversity, someone went on Twitter and noted that there were indeed at least three brown folks tweeting from the conference, which meant that at least a few travel professionals of colour had been invited after all. Whew! I promptly unfurrowed my brow and pulled my foot out of my mouth.

But. The White House’s party brought forth an issue that has long been a sore point among people of colour trying to make a living in the travel blogging/vlogging/writing game: a general lack of representation and recognition in mainstream travel media. Because we never seem to be invited to these sorts of events.  Because “Top 10” or even “Top 100” lists never seem to include us.  Because big brands never jump to work with us. Because we rarely, if ever, get featured in travel shows or tourism ad campaigns.

And because… while the ushering in of the digital age has created many opportunities in the online travel world, people who look like us seem to be routinely excluded.

Allow me to tell you a bit of a story which explains why this phenomenon is problematic. When I was young, I thought travelling was only for white people.  Don’t get me wrong, I travelled some with my family: we went to Jamaica to visit relatives and did the occasional road trip to Epcot and the Big Apple.  But foreign travel — the type that required dabbling in unpronounceable foreign currencies and plane rides with lengths in the double digits — felt largely out of my reach. After all, none of the black people I knew did it.  And none of the books, magazines, TV, or films I consumed heavily in my formative years offered images of voyageurs who looked like me.  Instead, they painted the quintessential globetrotter as white — blond and sinewy, skin tanned from days of exploring in the sun, and slightly hunched from carrying their belongings on their back.  Black people, for whatever reason, were not part of this narrative, so I simply didn’t know that seeing the world (be it for fun, for education, or for spiritual and emotional growth) was something we could do or aspire to. 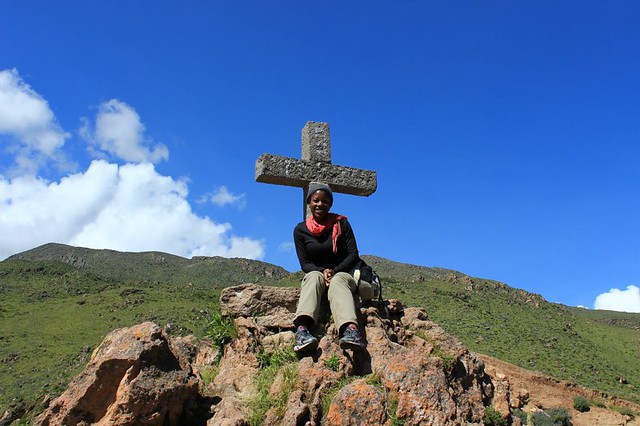 At the Colca Canyon, Peru

Twenty years later, however, the travel landscape is changing for us. In “Traveling While Black”, an article which appeared in the New York Times earlier this year, author Farai Chideya cites some impressive stats from the Mandala Research firm: nearly one-fifth of African-Americans take one or more international trips per year, and they spend $48 billion on travel within the United States *alone*. These numbers (which are rapidly increasing, I might add) don’t lie: we are going global — and in droves.

So why are we *STILL* not represented in mainstream travel media? Why aren’t we being asked to share our opinions, experiences, and realities at travel summits like the one held at the White House?  Why doesn’t the industry actively highlight the diversity it seems to pride itself on by featuring people who look like us? (Is it because we don’t matter?  Because the [white] people making the decisions don’t think to reach out to us?)  Given the numbers, it’s certainly *not* because we aren’t travelling. Still, despite the fact that we are going places, and spending money in those places, the media would have you believe the only people playing Christopher Columbus are of the melanin-deprived variety. 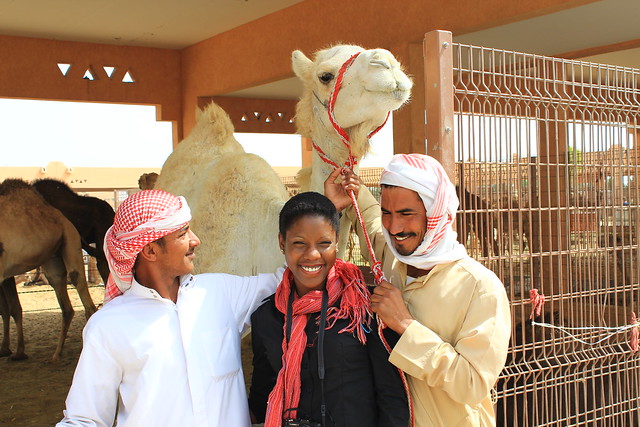 At the Camel Market in Al Ain, United Arab Emirates

Luckily, the nonproprietary nature of the internet means that anyone with a stable internet connection and a knack for storytelling can share their adventures abroad.  As such, travel websites and web forums that are FUBU (for us, by us) have sprung up in recent years and provided spaces for travellers of colour to share information, relate experiences, and inspire one another.  The prevalence of social media has also helped black travel communities grow and prosper. The aforementioned Nomadness Travel Tribe has a Facebook group with a membership nearly 10,000 strong (yass!) and founder Evita Robinson has organized trips for members to destinations as far flung as South Africa and Samoa (I even crossed paths with a Nomadness group trip in Spain a few years ago — we were both in the country to go running with the bulls in Pamplona) .  Travel Noire, headed by Zim Ugochukwu, offers travel inspiration daily via their Instagram feed.  With an impressive 46,000 followers(!), Travel Noire’s Instagram churns out stunning photos of otherworldly destinations — the majority of which are submitted by black jetsetters who gamely strike poses in front of the world’s most jaw-dropping sights.  And for my part, this little blog chronicles my travels through 70 countries and 6 continents (pratfalls and all) with a combination of anecdotes and colourful photos. 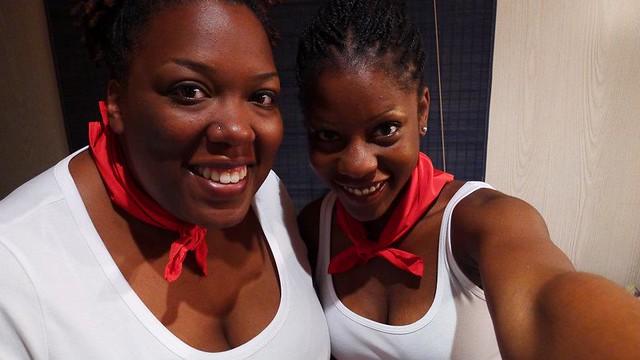 With my friend and  travel blogger Nicole is the New Black, in Pamplona, Spain 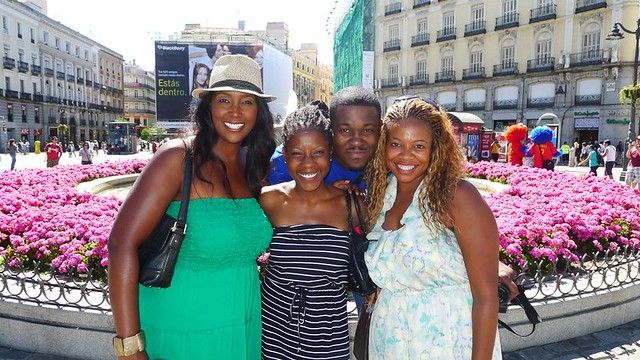 With members of the Nomadness Travel Tribe in Madrid, Spain

However, despite the fact that we are creating our own opportunities, representation in/by major media outlets still matters and the paucity of people of color in this arena just ain’t right.  Because, for those of us hoping to become the next Anthony Bourdain or Samantha Brown, being blanked by the “big dogs” in mainstream media means losing out on lucrative partnerships, collaborations, and sponsorship deals.  Because, more importantly, not being invited to summits like the one at the White House means that our unique voices and points of view are excluded from the important conversations that ultimately help change the world and inform our global perspective.  Because, our absence from the mainstream perpetuates the single story of whiteness in travel and helps to perpetuate the notion that travelling isn’t something people of colour do.

And because…given our history of migration (as evidenced by the far-reaching African diaspora),  it is clear that travel is in our blood.  Inherent. A part of us.  So denying us representation isn’t just unfair, it plain doesn’t make sense.

Have you noticed the lack of diversity in the travel industry?  Do you think representation matters, or am I way off base?