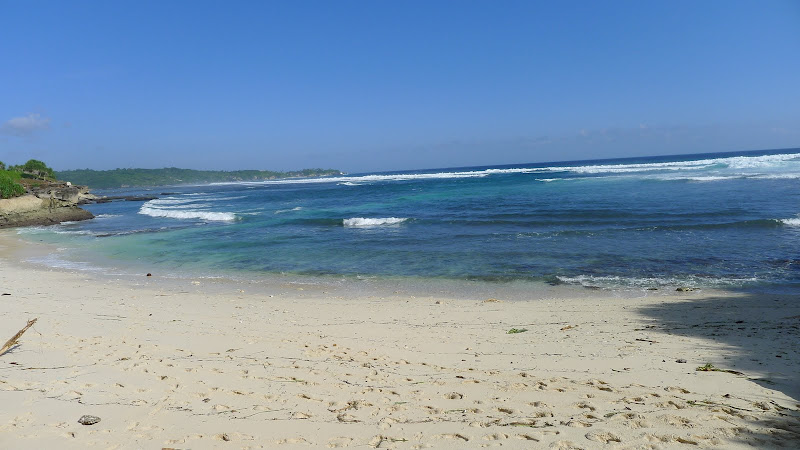 Seeking adventure after two days of repose, we inquired at our hotel concierge about renting a scooter for a day. Not even half an hour later, a gentleman showed up at the reception with a brand new cherry-red scooter. He jingled a set of keys before Liebling, who took them and came to join me near the pool where I was sitting and watching the transaction take place. Liebling nodded a confirmation that the arrangement had been made. I gulped. It was on. 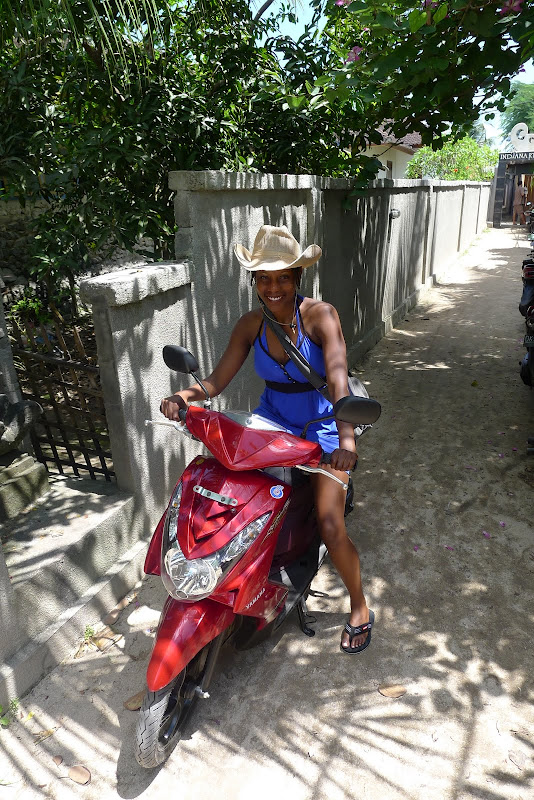 I am afraid of scooters, despite cavalierly posing for the photo above as we readied ourselves to leave. After the photos, Liebling mounted and I gingerly got on behind him. He carefully manoeuvred the Yamaha backwards out of the laneway behind our hotel. This back lane kissed the one main street of Lembongan, where a number of scooters of varying sizes, colours, and states of dilapidation whizzed past. My initial worries of not having a helmet, quieted when I first looked out into the street and saw that no one else was wearing one, came back with a start as we jerkily joined incoming traffic. I had nothing other than a cowboy hat, purchased for $5 USD in Cambodia when I visited Angkor Wat, to protect my head should tragedy strike. I tightened my grip around Liebling’s middle.

We were doing some exploring of the surrounding area. The air was hot and still even though we sped by on a motorized vehicle. The surrounding backdrop of trees and shrubbery was lush and green, the sky was the brightest of blues, and locals and tourists on foot and on vehicles went about their daily orders of business. A few Indonesian children playing in the grass on the roadside stopped for a moment to lazily follow me with their eyes as we passed. I observed all this with a touch of wistfulness. I would have loved to take a photo of this tableau, but did not dare take my arms from around Lieblings’s waist.

We continued along the path, losing our way on one occasion despite being equipped with a simple map. We ascended the path, then descended. I tensed and curled my fingers around the handles on the side of the scooter seat destined for that purpose. As we neared the ocean the breeze picked up and wafted through my short ponytail. We came to one crossroad after another. We zoomed past what appeared to be a cemetery and happened upon a memorial service. I noticed that nearly all of the gravestones had umbrellas attached to them, protecting the graves from the piercing heat of the sun. I longed to take a photo but did not feel comfortable enough to let go and reach for my camera. My fear of being disrespectful to the dead and the mourning also stopped me. We continued on. I finally got my opportunity to snap a photo when we stopped to peruse the offerings of a local roadside vendor and then, when I tried to muster up the courage to cross a rickety wooden bridge. 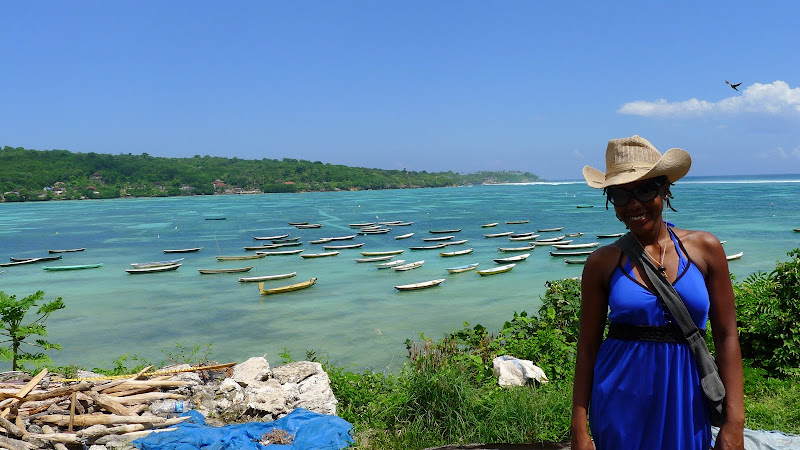 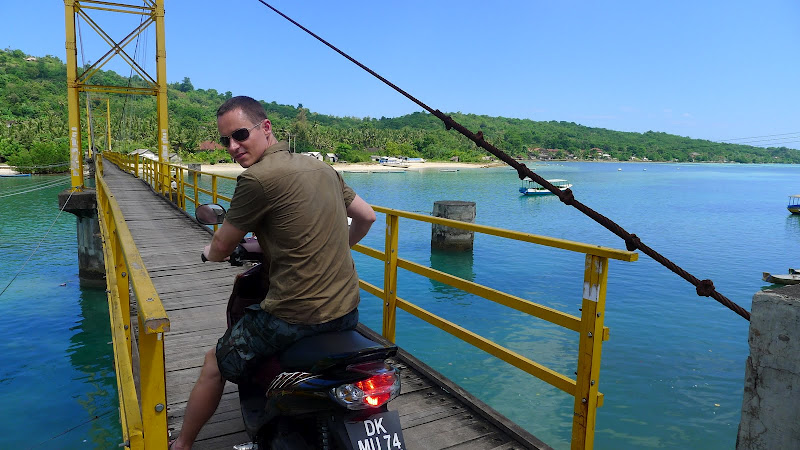 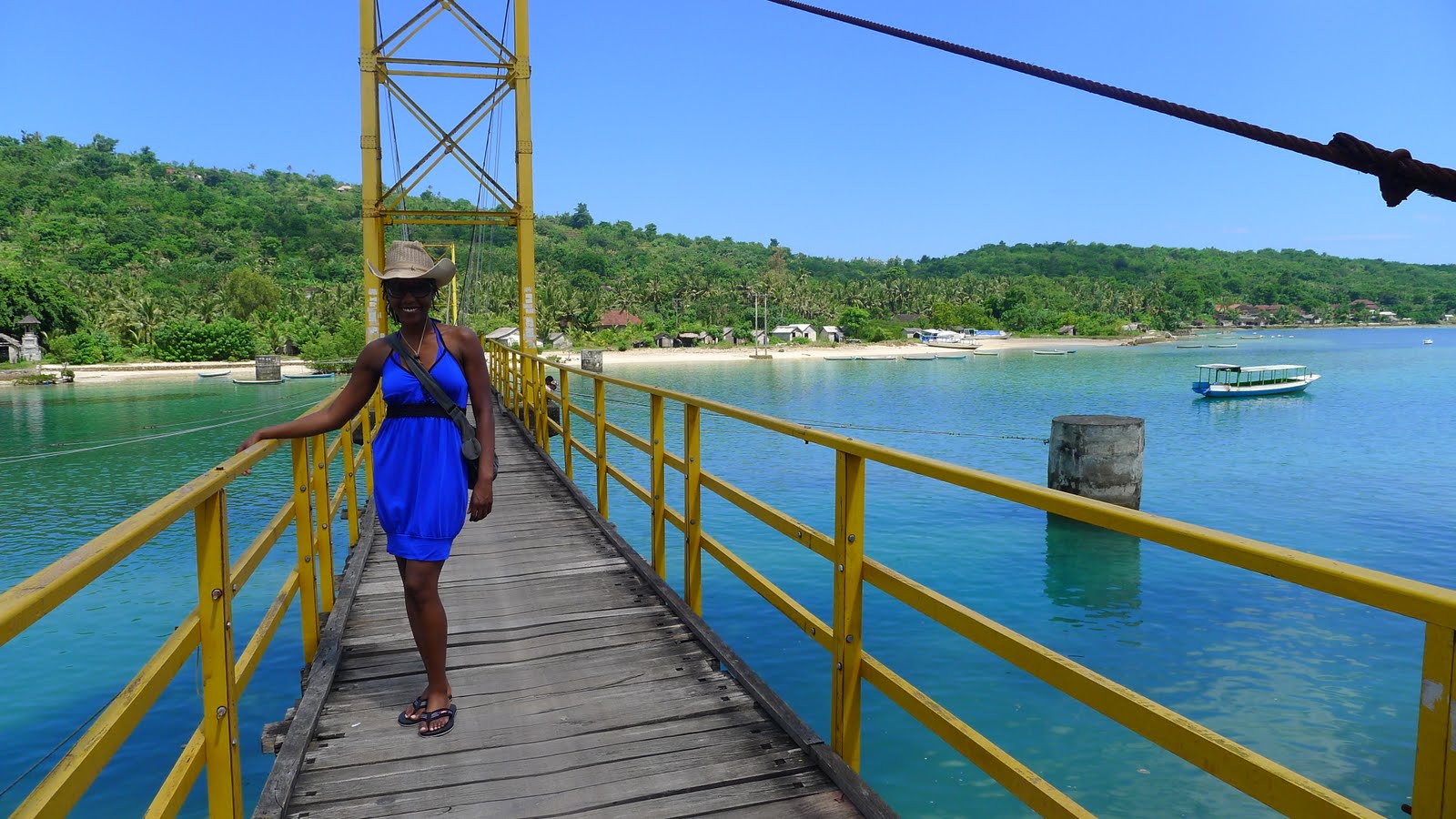 The scenery continued to dazzle and enchant. Livestock tethered to trees greeted us as we went up and up and up the winding terrain. We finally got to the top of our lookout point and had an open view of the sea, high about the thicket of bush and canopy of trees that provided a welcome respite from the blazing Indonesian sun. 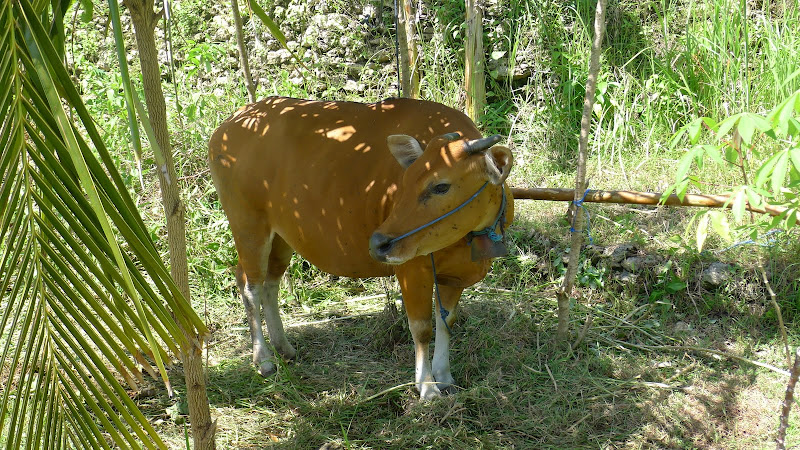 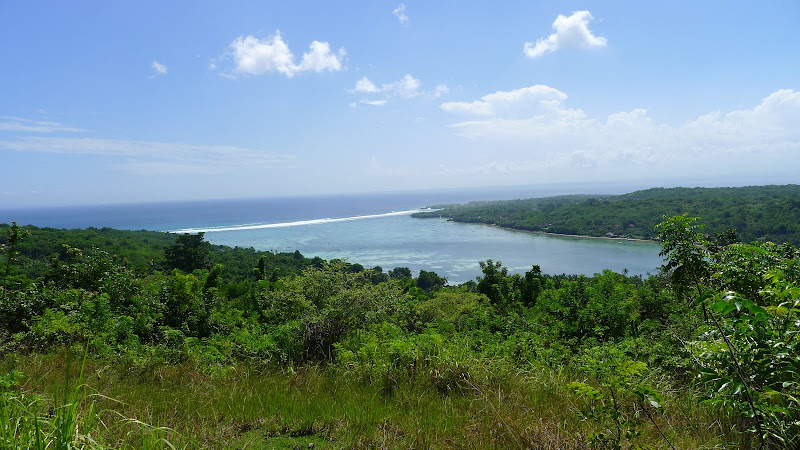 We left the lookout point, and started our descent. Crossing over the bridge (I kept my eyes closed), we came to a fork in the road we had encountered on our way up to the lookout. We took the road not taken and ended up here: 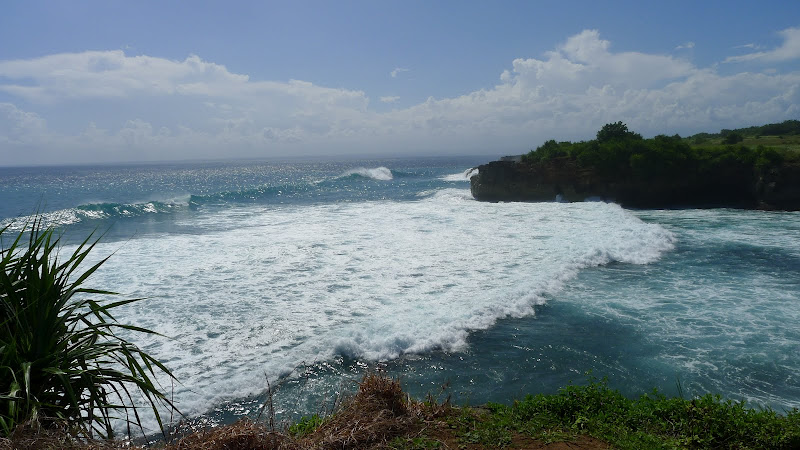 And then here, at the aptly named Dream Beach. 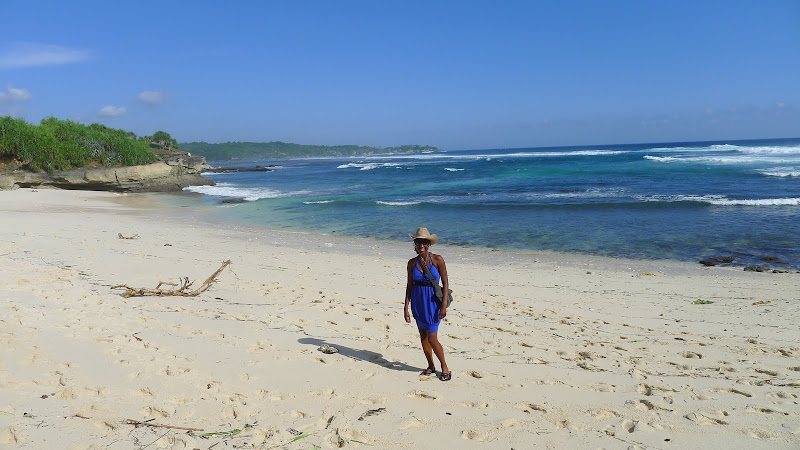 After a long, late, and lazy lunch at a restaurant nestled in the bluffs above the beach, we rode to Secret Beach in the weakening sunlight. I took off my shoes and walked barefoot along the moss covered rocks- the tide was extremely low in the late afternoon. 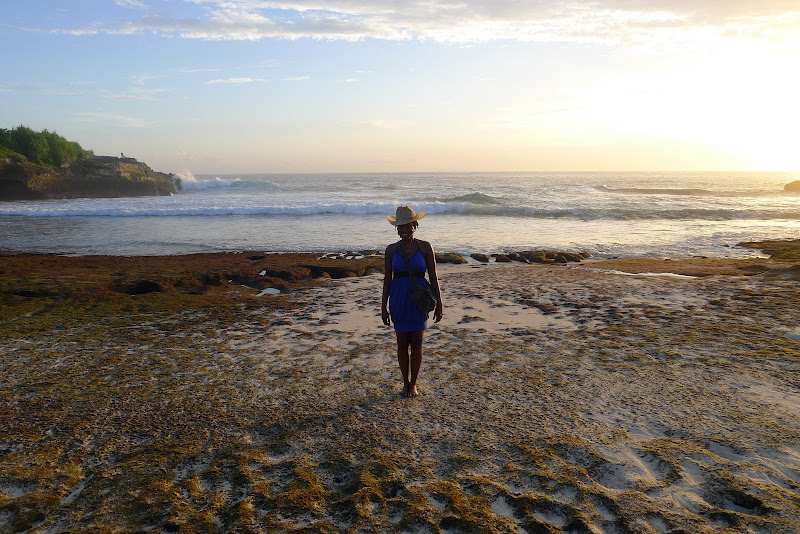 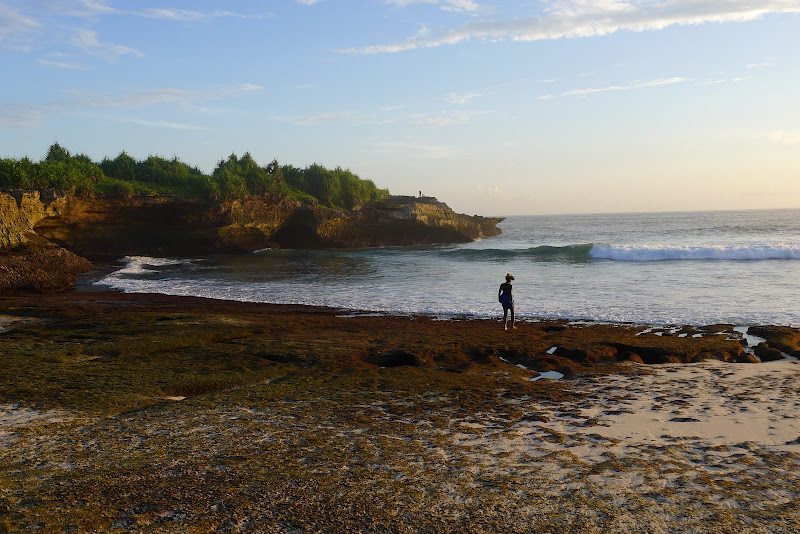 The sun began to make its departure and I marvelled at how the panorama changed as the sun changed from yellow, to pale orange, to burnt sienna. 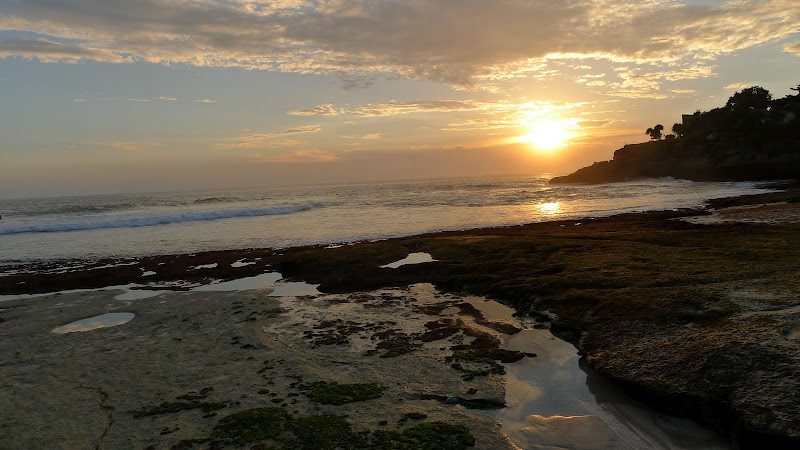 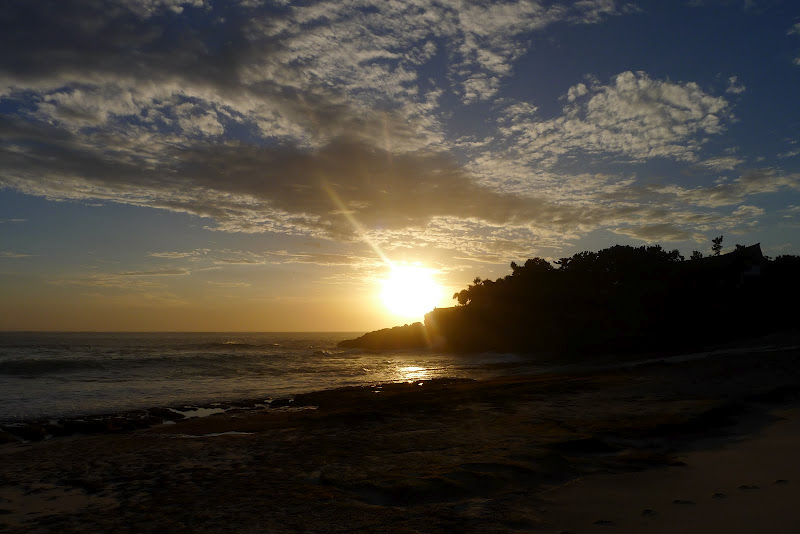 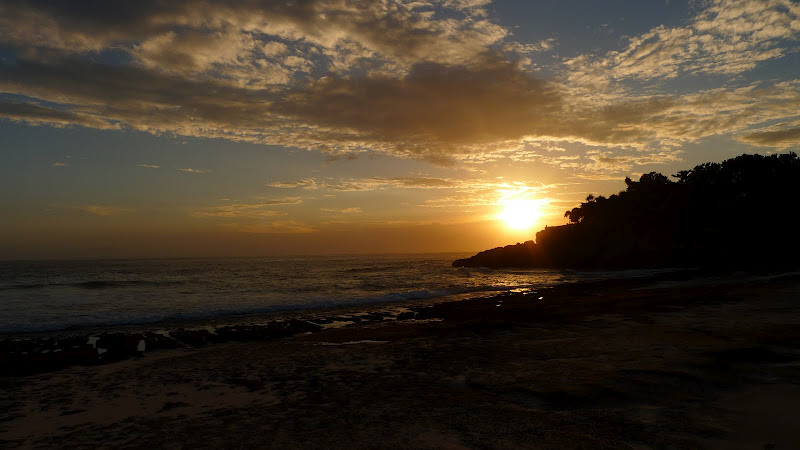 I signaled to Liebling: we had to go soon. It was getting dark and the tight, bush-laden pathways we had taken to get here could prove treacherous to navigate in the dark. But we still managed to take a few minutes to climb up onto the bluffs to take in the majesty of the sea. The power of the waves crashing against the rock wall left us breathless. Such beauty. Such force. 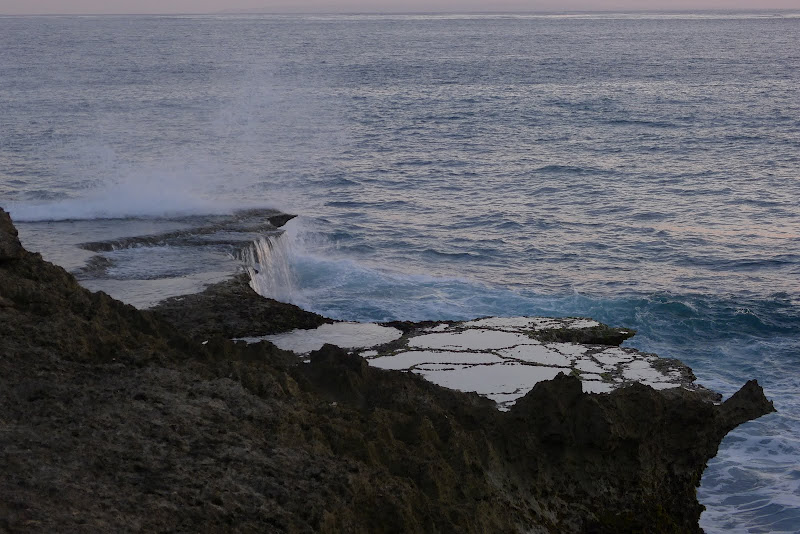 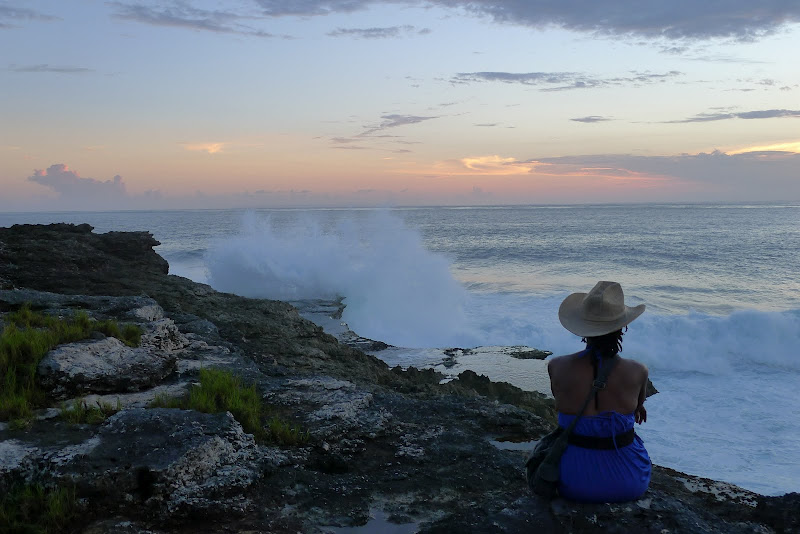 We packed up shop, walked back to our scooter, got on, and rode back in the direction from which we came. This time, however, I linked my arms loosely around Liebling’s waist, the picture of relaxation. I rested my head on his back and sighed contentedly into his neck. I had found paradise. 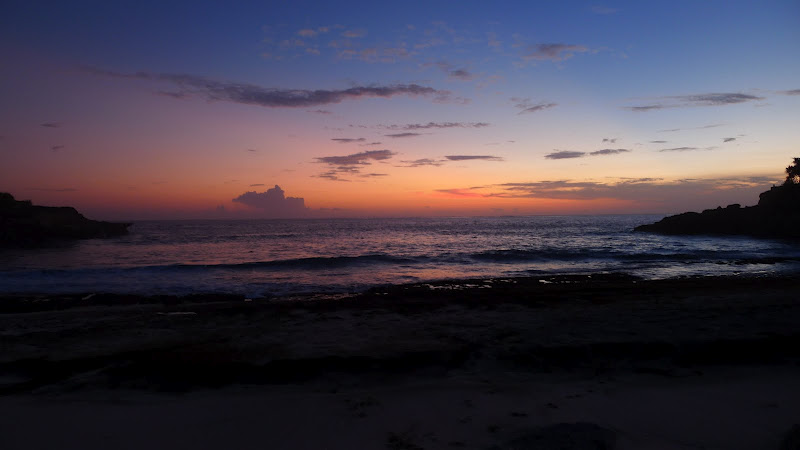